Created 12-Mar-14
15 photos
The Hazara Rama temple is situated in proximity to the King’s Audience Hall, Stepped Water Tank, Mahanavami Dibba, Palace of King Krishnadeva Raya and the Queen’s Bath. Judging from the proximity to these structures it has been opined by the archaeologists that this temple could have been the private temple of the Royalty for their worship.


Unlike the Virupaksha temple this is not a huge temple but a much smaller one as would have been designed and constructed for private worship. This temple is dedicated to God Ram who is the 7th Avatar of God Vishnu. Ram is often considered as the perfect man. His devotion to and respect for his father is highly praised. The story of the Hindu Epic “The Ramayan” is well known around the world as the story of Ram’s wife Sita who is kidnapped by a demon King Ravan of Lanka (now Sri Lanka) and rescued by Ram and the army of monkeys lead by their chief Hanuman who us also considered as the most ardent devotee of God Ram.

The temple is east facing and is enclosed within stone walls on all four sides. The exterior of the walls have carved panels in five horizontal rows, one above the other, representing a procession of elephants with riders and attendants, prancing horses with riders and rider less horses led by grooms, wrestlers and soldiers in procession witnessed by a few seated royal figures. These panels represent symbolically the power of the rulers and the might of their fighting forces paraded annually at the time of the Dusshera festival at the Mahanavami Dibba.

Once you get inside the temple you are struck by the beauty of the endless bas relief panels depicting the various scenes from the Hindu Epic “The Ramayan” starting from the prayers of King Dasharath for begetting sons, the travails of Ram during the course of his 14 years exile in the forest, the kidnapping of Sita by Ravan, the defeat of Ravan in the hands of Ram, the rescue of Sita and finally the triumphant return of Ram to Ayodhya and his coronation as the King of Ayodhya. The panels are neatly and sequentially laid out with mind boggling intricacy and architecture. It is like the Amar Chithra Katha in stone! It is understandable that the Hoysalas were famous for their filigree type of architecture as they worked with soft stone. It is unbelievable as to how the Vijaynagara architects could conceive such fine details and execute their design in hard rock as available in this area.


The Hazara Rama Temple at Hampi is a fabulous masterpiece of the Vijaynagara architecture and the excellence of the craft of their sculptors. How they managed to execute such fine work in hard rock with the then available facilities and tools will forever remain a mystery. Once again these are master pieces that cannot be recreated or emulated in current time.


As left this place I imagined for a moment the place as it would have looked a few hundred years ago with the sculptors carefully chiseling away on the rock with utmost concentration to create this poem in stone. 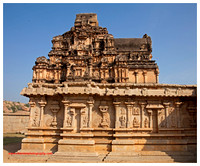 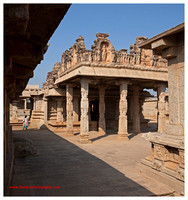 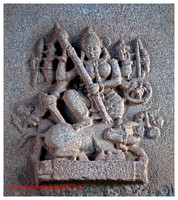 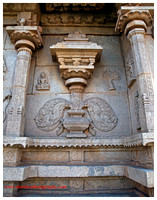 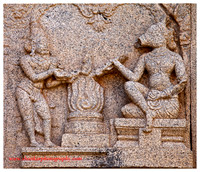