Created 30-Apr-14
15 photos
This appears to be the epicenter of Hampi’s attractions. The Vitthala temple complex is the most extravagant architectural showpiece of Hampi. No amount of words can explain this spectacle. The temple is built in the form of a sprawling campus with compound wall and gateway towers. There are many halls, pavilions and temples located inside this campus with exquisite carvings in stone with intricate details that defy description.


Vitthala, after whom the temple is known, is a form of God Vishnu and this aspect of Vishnu was worshiped in this part of the country as their cult deity by the cattle herds. The temple was originally built in the 15th century AD. Many successive kings have enhanced the temple campus during their regimes to the present form. The highlight of Vitthala temple is its impressive pillared halls and the magnificent “Stone Chariot”. There are several “Mantapas” or halls with stone columns that carry exquisite carvings and an overwhelming array of sculptures all over the place. The entire place is peppered with carvings of “Yali” (a mythical creature said to be more powerful than a lion or a tiger or an elephant). on stone columns and on balustrades.
In my next album I will present photographs of the Yali and discuss about the various forms of this mythical creature.


As you enter the complex, there are a series of platforms laid out and on the centre most one is the stone chariot that you will instantly recognize from the brochures and pictures in travel magazines featuring Hampi. One of Hampi's most iconic structures, the stone chariot was actually a shrine housing Garuda, the Eagle God and a vehicle of Lord Vishnu, and is carved with battle scenes. Given the temple is dedicated to Lord Vishnu and the stone chariot faces the inner sanctum where Lord Vishnu's idol was housed, its presence and placement is symbolic.


As you tear your eyes away from the chariot and enter the main hall a series of balustrades carved with elephants and Yalis come your way, opening out to the Maha Mantapa where one of Vitthala temple's most popular and fascinating aspect is present - the musical pillars. Each massive pillar has been carved out of one rock and the outermost pillars emit different musical tones. Unfortunately, due to unmindful tapping of the pillars over the years they sustained considerable damage and today tapping on them is prohibited. The entire complex is replete with fascinating and mesmerizing sculptures, carvings and stucco ornamentation.


Literally the Vitthala Temple complex is an “Architectural Explosion” of indescribable architectural complexity, marvel and beauty.


My earlier album on Vitthala Temple was on the complex and it structures. This album is about some of the icons there which have been photographed. 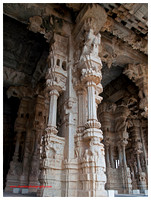 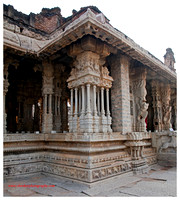 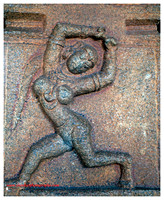 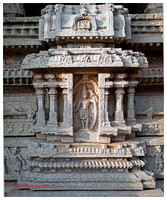 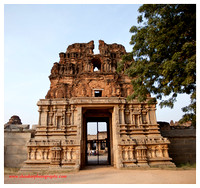 Categories & Keywords
Category:Architecture and Structures
Subcategory:Temples
Subcategory Detail:
Keywords:Dravidianarchitecturre, Hampi, Karnatakastate, Krishnadevaraya, Vijayanagaraempire, Vishnutemples, Vitthalatemplecomplex
Guestbook for Vitthala Temple Icons. December 2013
Mani(non-registered)
"Ya'll can enjoy these icons"
Must add Hampi as a must see to any visitor to India. There is so much here.
Thanks for sharing !
The guestbook is empty.
Loading...
© Shankar Adisesh
Powered by ZENFOLIO User Agreement
Cancel
Continue