Created 22-Nov-14
25 photos
This tongue twisting name which literally means "The Chola town which holds the water of (river) Ganges" was constructed by the great Chola king Rajendra Chola 1 - the only son of the Chola king Raja Raja Chola 1. Raja Raja Chola 1 was one of the greatest Chola kings a warrior who annexed territories far and wide, a patron of arts & architecture and a philanthropist who ruled over the the mighty Chola empire during the years 985 - 1014. Like his father, Rajendra Chola was also a great warrior who ventured into the Northern parts of India and brought many territories there under his control. He was also a great patron of arts and architecture. He reigned during the years 1014 - 1042. During his coronation he assumed the name of Rajendra and hence came to be known as Rajendra Chola. To commemorate his victory of the northern states and especially the Pala dynasty and as well as a mark of respect for his great father he built this magnificent Shiva temple at Gangaikondacholapuram. Rajendra Chola ordered the construction of a lake to hold the water of the Ganges which would serve the purpose of irrigation. This lake was called the "Chola Gangam" which is now known as the Ponneri lake.


This temple is similar to the Brihadeeshwara (Shiva) temple in Tanjavur constructed by his father the great Raja Raja Chola 1. The temple is more or less an exact replica of the Shiva temple of Tanjavur as a tribute of a son to his father Raja Raja I’s lofty temple building standards and just a shade smaller in scale. The impressive Vimana which is an architectural marvel is about 55m tall, and is topped by an 80 tonne cupola. The Shiva Linga is 4 ft tall and the Nandi is almost as large as the one in the Shiva (Brihadeeshwara) temple at Tanjavur. The temple also has a thousand pillared hall and the friezes on the walls are truly worth seeing. There is also a "Simha Mukha" or Lion faced well in the complex.


The most outstanding and unique sculptures in this temple are the Nataraja,(Shiva in the eternal cosmic dance form) Coronation of king Rajendra Chola by Shiva and consort Parvati, the Dancing Ganesha and the Ardhanari or the half man-half woman manifestation of Shiva.


The Cholas were believed to be very particular about the keeping records. One can find inscribed texts in the copper plates and in walls of the temple. The walls provide interesting anecdotes about several victories of Rajendra Chola, the land grants made during his period, king's ascend to the throne etc. Gangaikondacholapuram took pretty long time to complete. But it was a favourite place for the monarchs to ascend the thrones.


At this stage it would be of interest and worthwhile to recall another interesting aspect of the construction of lakes by the Chola kings to serve the needs of irrigation and drinking water supply in their regions. King Paranthaka Chola ruled in the 10th century somewhere between 907 to 935 AD and wanted to improve the irrigation facility in his region and ordered the construction of a lake. This was known as the Veera Narayanan Eri or lake. Veera Nararyana was the name given to Paranthaka Chola on account of his valour. This lake is now called the Veeranam lake which is one of the drinking water sources for the city of Chennai.


We in Tamil Nadu also owe a tremendous debt of gratitude to the Cholas for having constructed the Chola Gangam or the Ponneri lake and the Veera Narayanan Eri or the Veeranam lake which are playing a significant role today in fulfilling the all important role of sustaining the water requirements of a thirsty population of the State of Tamil Nadu - a vision of the Cholas more than a 1000 years ago. This is quintessentially a long term planning which our present day political masters would do well to imbibe. 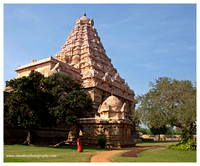 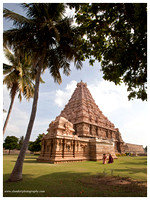 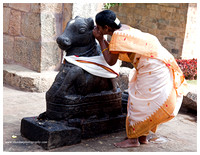 Categories & Keywords
Category:Architecture and Structures
Subcategory:Temples
Subcategory Detail:
Keywords:Choladynasty, Cholaempire, Dravidianarchitecture, Rajaraja1, Rajendrachola, Shivatemplesofsouthindia, Southindiantemples
Guestbook for Shiva Temple. Gangaikondacholapuram February 2014
Mani(non-registered)
Fantastic pictures and account of the history of the Cholas. Never knew they were responsible for Veeranam. Thought it was MuKa .. JK ! You make us want to go and visit in person.
Thanks !
The guestbook is empty.
Loading...
© Shankar Adisesh
Powered by ZENFOLIO User Agreement
Cancel
Continue