This is one of the oldest temples of Karnataka built around the 9th century A.D. by the Bana Queen Ratnavali, in the Dravidian style of construction. The main temple has been renovated by other dynasties such as Chola, Hoysala, Pallava and Vijayanagara kings. This temple houses three other shrines within the temple complex, viz., Arunachaleshwara, Uma Maheshwara and Bhoga Nandeeshwara.


As one goes thru the temple complex one will have the opportunity to see the magnificent stepped water tank of exquisite beauty and architecture. This water tank is known as Sringeri Teertha. It is also referred to as the Kalyani Pushkarini. The tank has rock cut steps leading to the water and it is said that on festival days such as Deepavali thousands of lamps are lit to decorate the Pushkarini.


The temple is replete with pillars of intricate carvings. Of particular interest and fascination is the Vasantha mantapa, an ornate 13th century contribution from the Hoysala era in the Uma-Maheshwara shrine at the Bhoga Nandeeshwara temple complex. The intricate designs on stone here are spell binding and one stands there in front to the pillars simply transfixed.


Awesome temple, awesome architecture and literally a feast for the eyes and food for the soul. 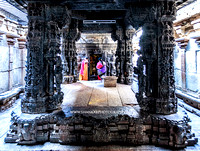