Created 2-Oct-14
22 photos
Like the Taj Mahal in Agra the Tanjavur Brihadeeshwara temple, dedicated to God Shiva is also one of the wonders of the world. This awe inspiring and an architectural and engineering marvel was built by the great South Indian king of the Chola dynasty - King Raja Raja 1 who ruled during 985 - 1012 AD. It is an outstanding example of the Chola architecture. Recognizing its unique architectural and engineering excellence, UNESCO has declared this temple as a World Heritage monument.


Everything about this temple is big and gigantic. The entrance gate, the "Vimana" (tower of the main sanctum santorum), the temple per se are all huge and marvelous. Built out of solid hard stone the temple complex leaves one with a numbing a expereince. One is left wondering as to how - more than a 1000 years ago with the then limited facilities the human mind could conceive, plan and implement such a grand structure of several thousand tonnes and such intricate architecture which stands majestically even as on date.


The "Vimaana" or the tower over the main sanctum sanctorum is about 65 meters tall, 14 tiered and is topped by a huge monolithic cupola which is said to weigh more than 80 tonnes and thus a testimony to the engineering and architectural skills of the Chola empire. The temple is dedicated to the Hindu God Shiva and so the sanctum sanctorum has a huge 'Lingam" (the representation of Shiva) which is about 4 meters tall. Where there is Shiva there is bound to be a "Nandi" (or the bull guardian of God Shiva). This monolithic statue of Nandi is one of the biggest in any Shiva temple and measures approximately 6 meters in length, 2.50 meters in width and about 3.7 meters in height. A majestic piece of carving enclosed in a stone enclosure with intricate paintings on the roof.


Apart from the main shrine devoted to God Shiva there are other shrines in the temple complex devoted to Ganesha (The Elephant God), Subramanya (Ganesha's elder brother), Nataraja (Dancing form of Shiva) etc.


One can never be really satisfied visiting this temple once. It draws you there again and again and no matter how many times you have visited this temple there is always more to see and admire and more to photograph.


In 2012 a celebration was organized by the State Government of Tamil Nadu to commemorate 1000 years of the Brihadeeshwara temple. As King Raja Raja was a great patron of dance and music - 1000 Bharatanatyam dancers came together and performed here to celebrate 1000 years of this temple.


This album is about the temple complex. I will present another album with a few photographs of the various icons in the temple. 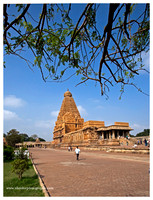 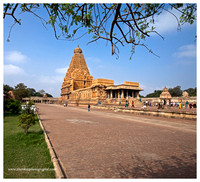 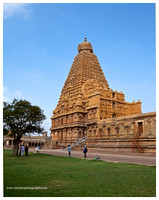 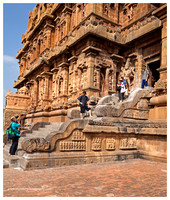 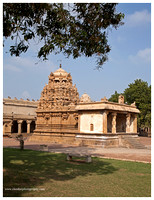 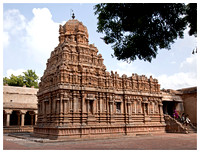 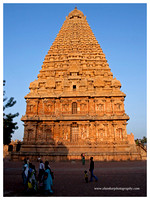