23 photos
Onam is perhaps the most important festival in the southern State of Kerala in India. This is predominantly a Hindu festival spread over a period of ten days. However, today this festival has turned very secular and perhaps the entire State of Kerala celebrates this festival irrespective caste, creed or religion. It is also the State festival of Kerala and is celebrated over a period of four days in the Malayalam (people of Kerala origin speak a language known as Malayalam) month of “Chingam” (August – September) and marks the celebration of God Vishnu in the Vamana avatar as well as the celebration for the annual visit to our planet of the legendary demon King Mahabali whom the Malayalees consider to be their King to his home in Kerala.


Vamanamoorthy Temple in Thrikkakara (also known as Thrikkakara Temple), located around 15 kilometers northeast of Ernakulam near Kochi, is particularly associated with the Onam Festival. This temple is dedicated to Lord Vamana, the fifth incarnation of God Vishnu. Legend has it that Thrikkakara was the abode of good demon King Mahabali, who was popular and generous. His reign was considered to be the golden era of Kerala. However, the Gods grew concerned about the King's power and popularity and prayed to God Vishnu to help them get rid of the demon king Mahabali. Vishnu promised to help the Gods.


Knowing about Mahabali’s generous and charitable nature, Vishnu went to the king in form of a Brahmin child called 'Vamana' and asked for three steps of land. Mahabali readily granted the wish to the child little realizing that child was God Vishnu himself. However, God Vishnu transformed himself to his full size and covered the entire Earth in one step and all of the Heaven with another. When he asked Mahabali, where to keep his third foot, the humbled king offered his head to him.


Touched by the devotion and humility of the kind, Vishnu made him the King of the nether world and granted him the request that he may visit his kingdom every year for four days which is celebrated as Onam for a period of 10 days.


The festival is marked with plenty of cultural events such as classical music, dances, floral decoration known as “Pookkalam” and of course the famous meal that is served on the day of Onam – known as the “Onam Sadya”. The last day of Onam is known as Thruvonam which this year falls on September 07, 2014. 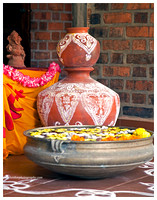 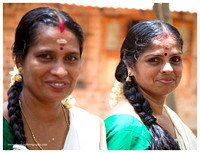